Ok, since we didn't drown at the waterfalls, or get eaten by cannibals, we decided to go find dinner. Roong was convinced that i needed a steak. It has been a pretty much beefless last 2 months, so i was all for it. She took me to this little place off of the main road back to Pattananikom. It was beautiful! It was outside, with lots of trees and flowers, and you sat in these little teakwood gazebo things. It was looking like rain, so we had a nice cool breeze. The waiter asked me what i wanted, and i told him a T-bone and a salad. He then asked me if i wanted a "meaty bum"???? I was hoping he was actually asking if i wanted it cooked "Medium". So i said "Fire it up bubba!". It's a good thing that our waiter and waitress were nice, and the that the place was pretty, cause the food sucks! Haaaaaa! The steak was about 1/4 inch of undercooked fat. Yeesh! It's not like i am hard to feed yanno! But that explained why Roong ordered orange juice and a macaroni salad. I gotta keep a closer eye on her. She loves to set up these little experiments. Haaa! Oh...Thailand has its own beer, called Singha. It tastes pretty good. Or maybe it was just good cause it was cold, and i haven't had one in a while. Who knows? 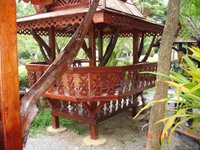 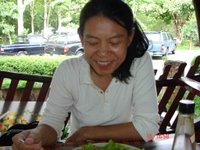 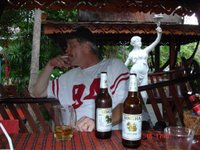 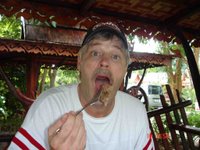 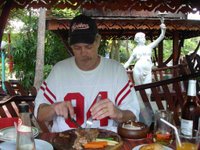