It's all happening at the zoo 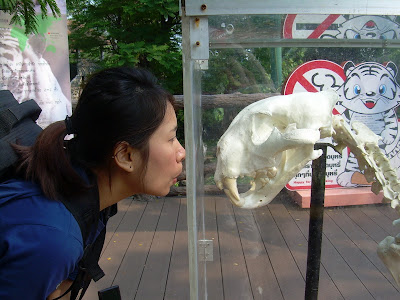 Oh well, it's back in purgatory again. But for a few days, I escaped!!! We spent a few days in BKK last weekend, and had a pretty good time. The two highlights of the trip were our trip to the zoo, and finding a Subway sandwich shop. Personally, I had more fun at Subway than I did walking all over the place at the zoo. It isn't nearly as big as I thought it would be, but the girls had never been there though, so they had lots of fun taking photos.

The most memorable thing at the zoo had to be the elephant show. They came out and did all the tricks you would expect, but with one addition. When they came out, the trainer had them all line up facing the audience, turn around, and take a dump. Yep, that's right, take a dump on command. I wonder how long it took them to figure out how to do that. I also wonder why they would want to. This place is so weird.

Palmiez kept saying that she wanted to see the "water cats". I couldn't figure out what she meant. At first, I thought she was talking about the otters. But that wasn't it, she meant the seals. I guess that's how the word for seals translates here. Considering that I have students with names like "Turd", and "Watermelon", these things shouldn't surprise me.
Posted by Don Brand at 5:32 AM 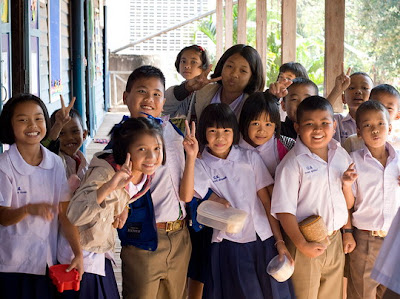 Yep, this is what you imagine when I talk about my Thai students. A bunch of sweet little peace sign waving smiling angels, right? Haaa, you wish! That is what they look like on the outside, but inside, there is a raging inferno of naughtiness just waiting to explode. Well, not in all of them, but most.

They changed my schedule at work about 2 weeks ago. It happened, because one morning I walked into my M-2/1 class, and it was a disaster area. I mean it looked like a bomb went off in there, and all 45 kids were laying around on the floor, or braiding each others hair. I asked them where their teacher was, and they said that she had left several minutes ago. That was odd, because nobody here can tell time, and they always run late with their lessons. I asked them why she left, and they said that they didn't know, but that she was crying. Didn't know? The demons had struck again, and this wasn't the first time. Their teacher is a very sweet girl, and had always seemed to be able to hold her own in a classroom. I had had more than enough.

I was just about to unload on the little shits when the head of our small English department, Miss Aww, happened to walk by. I am getting very tired of being angry all the time, so I called her in. When she saw the state of the place, her jaw dropped to her knees. I explained what had happened, and kind of went off on her because this was getting to be too often of an occurrence.

She didn't say anything for some time, she just stared at the kids. Then she started mumbling softly to herself, and started slowly walking around the room. The more she walked, the gradually louder the mumbling got, until she was shrieking at them. This went on for several minutes, but then stopped as abruptly as it had started. She finally realized that they weren't paying a damn bit of attention to her. In the 5 minutes that she had been raging, not one of the little jackasses had bothered to get up off of the floor, straighten a desk row, or stop braiding whomever's lice infected mop they happen to be working on.

She looked at me and blinked a few times. I told her that this was the way they were. This seemed to be the best that they could behave. I wanted smaller classes, or an assistant teacher to patrol the room while I was giving the lessons. Anything! Something had to be done. If the school wasn't going to allow us to punish or fail them, then they could figure out a way to fix this. The students know that there is no discipline at the school, so they have no fear. I also reminded her that it is very easy for a native English speaker to get a job in Thailand, and that any school in the country would pay me considerably more than their little slice of Hooterville hell does. She just nodded and walked out.

The next day, Aww appeared in my first period class and told me that she needed to talk to me about a schedule change. This sounded better than nothing, because teaching more than 1 grade level really sucks. The skill level in any one grade is diverse enough as it is. Anyway, a few hours later, she came to my office and informed me that I would no longer have to teach the low skilled classes in 7th and 8th grade. But, I would be picking up the 4th, 5th, and 6th grade. WTF!!

I started to go ballistic, but after a quick moment of thought, didn't. The things that I was having to teach the 7th and 8th graders are things that they should have learned in the 4th - 6th grade anyway. Maybe I could get them back on track, at least a little bit anyway. She also said that they would split each class into 2 thirty minute groups. Given their attention span, that sounded pretty good. Plus, I still got to keep my higher skilled 7th and 8th grade classes. The only downside is that I now have to teach 5 grade levels, 2 more hours per week, for the same crappy pay.

The first week went pretty well. Thirty minutes is about all that the youngins can take, and still remember at least some of it for their next class with me. The smaller classes make them much easier to manage too. I keep the lesson very simple, and just focus on understanding and lots of repetition. This usually results in a shouting match between the girls and the boys, but who cares if it works, and they can remember what to say and when to say it.

They also let me teach them in the theater room next to the computer room. AIR CONDITIONING!!!!! It takes a lot more energy to keep them motivated during a class, so I am pretty exhausted afterwards, but they seem to enjoy it. A bunch of them actually show up early. I even get hugs from some of the bolder ones after class sometimes. I think that's a good sign.
Posted by Don Brand at 12:32 PM