Ok, just how bored are you? If it gets really bad, there is always "Sushi Time". You have to make sushi to order for the customers. Remember to pick up the empty plates and re-order ingredients when you are running low. Have fun!

Roong has been working hard at making greeting card and such seasonal things from many of her photos. My mom was cool enough to send some samples for her to get an idea about Christmas from. She also sent some shots of the snow. I am the only one in this household that has ever seen it. I guess it is a pretty strange concept if you have never seen it before. I have had to explain a few things about it to them, such as, building a snowman is in no way a religious ritual. Palmy and Pukky were a bit doubtful when I told them that American children LOVE to shovel snow. Haaa! I told them about some of the 8-10' deep blizzards that Jen and I weathered in Lake Tahoe. I don't think they could really grasp the magnitude of such a thing. 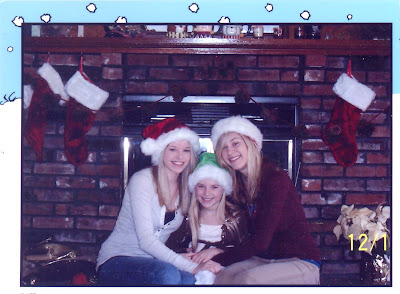 My nieces (eat your hearts out boys). From L to R, that's Melyssa, Catherine, and Lauren. At least I think, I haven't seen them in a few years. Catherine was refusing to talk last time I saw her, I hope she got over that. Mel was in the middle of her 37th boyfriend trauma of the week, and Lauren was doing a bit of acting. I have another niece named Kelly, and a nephew named Tyler. I will try and get Mom to send me some recent pics of them. 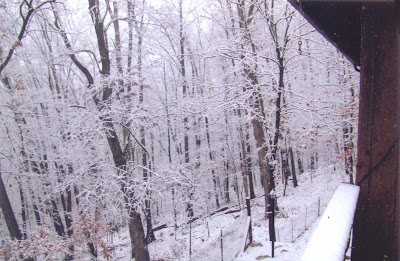 This is a shot from the deck on my Mom's house during the last snow. There is an eerie calm and quiet about being out in the woods like that. Very peaceful.....and creepy.
Posted by Don Brand at 3:01 PM

English Camp and Us

Hi all. We just had our "English Camp" at Penpattana a few weeks ago. I just got some of the photos back from one of the teachers that was acting as the photographer for the event. This was grades 1-3. They are a lot of fun, because they are up for just about anything. 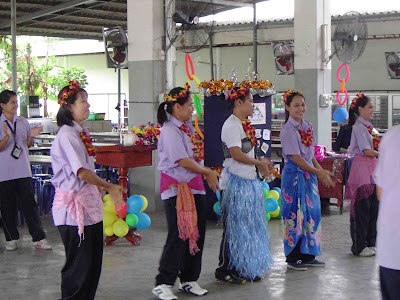 This is the shot of the teachers starting a game they play with a totally unpronounceable name. The teachers start out with a small line of children behind them, and as the music plays, each of these little trains does sort of a duck dance. As they move around, the lines will run into each other. When this happens, the teachers do a rock, paper, scissors. The loser has to join the back end of the winners kid train. This goes on until there is only one huge line with everyone in it dancing around. 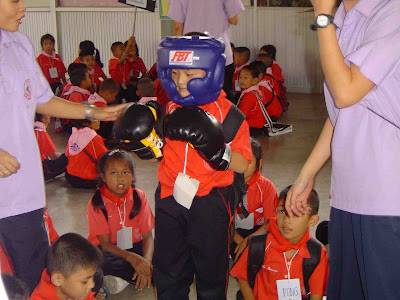 This pic is of one of the combatants getting ready for Muay Thai. That's a trditional Thai martial art that is pretty cool to watch. The kids are pretty harmless, but Muay Thai is pretty exciting when you are watching the real thing. This is the game I played with them. Luckily I had about 5 girls there to help me keep them focused. The object was to first write their nickname on a balloon in English. Then, they tied the balloon to their ankle. Once the whistle blew, the object was to pop everyone else's balloon, and the last one with a balloon was the winner. The only problem we ran into, is that many of the 1st graders were terrified of the sound that the balloons made when they popped. Not sure why. The other problem we had, is that many of them are so small, that they couldn't pop the balloon. Some solved this by sitting on it and bouncing up and down like on one of those bouncy balls with the loop you hang on to. When this didn't work, we would gently grab their shoulders and push down to give them a little extra umph. Most had a fun time with it. 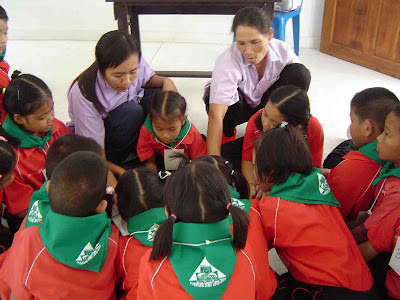 I am not sure which game this was. 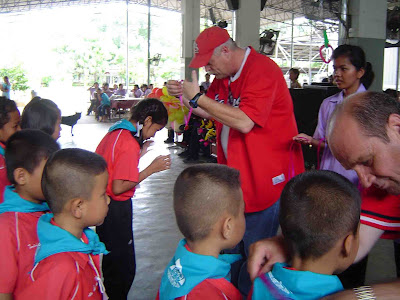 This is Jan and I bestowing the medals to the winners. The medallions were made of chocolate covered with tin foil. I think most were eaten before they got too far. 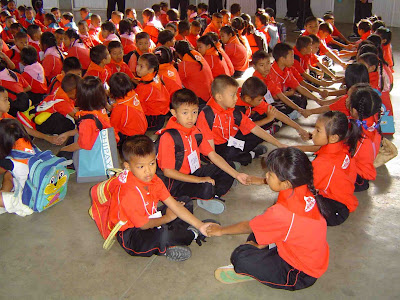 Another shot of one of the groups. They do a lot of sing-a-long stuff. Seems to keep their attention and keeps them happy. 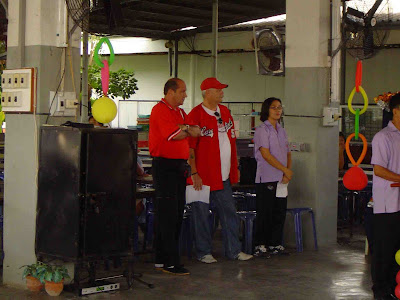 That's teacher Aww standing next to me. I think we were waiting to give the closing speeches or something. Aww is a hoot. She is great to work with, but has an impossible job that no one in their right mind would want. Being the middleman between the teachers and our boss would make anyone crazy. 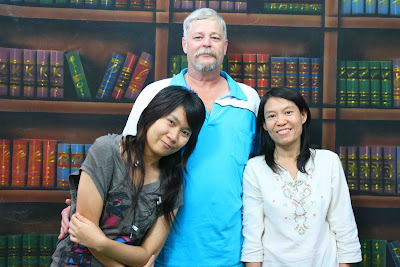 And finally, is a the latest shot of 3/4 of us. That's Palmiez on the left, and Roong on the right. Palm is doing quite well in school so far. Pukky was still sulking at home over one thing or another. Her loss, we look damn good!
Posted by Don Brand at 8:56 PM 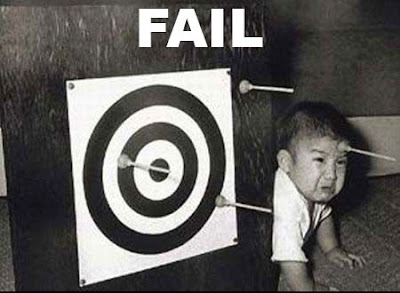 I am trying to come up with a new grading system at school. Something that will leave a lasting impression of how serious a matter good grades are on the kids. Archery just seemed a logical step.
Posted by Don Brand at 8:15 AM