This is one of the most amazing things I have seen in a while. Thanks to my friend Warren Haney for turning us on to it. (click the X's on the ads to get rid of them, better view)

Summer camp has started. Not only does this suck because our boss took our summer vacation away from us, and not only because I have to spend 200 baht a day commuting to a different school to take part in something I don't want to do anyway, but it also sucks because I have to teach kindergarten! GRAWRWRARARARAR!!!

I teach "English conversation" class, not "run around like little maniacs and do what ever you want until you feel it's time to start crying because you're bored" class! OK, I'm done.

It really wasn't that bad. I was fortunate to have 4 Thai teachers to help with the class. These girls were on top of everything, and had a stare that could curdle milk if the kids got up to any mischief. They were a fantastic help in keeping the class running smoothly. Thanks ladies! 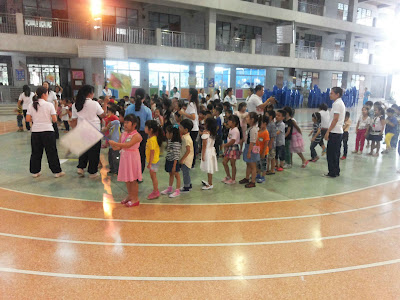 Here is a shot of the kids trying to get organized first thing in the morning. It had just started to rain unseasonably, which was not a good sign. Just trying to get them to line up in six rows was a chore for the girls. 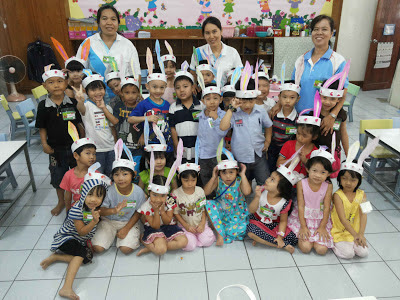 This is the first group. They acted pretty much like I expected. About half of them got in to the activity, which was making those little rabbit ear head bands they are wearing. The other half, not so much. I have no idea why they were making the rabbit ears. 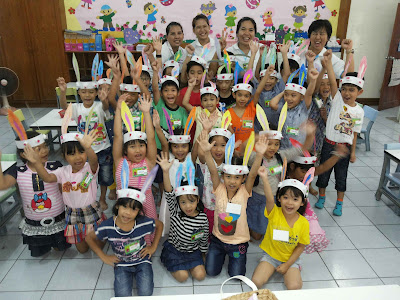 The second class was much more laid back. And much more comfortable around me. You can tell by how close they will get to you without getting that panicky rabbit look in their eyes. Most of them climbed all over me when the school photographers were taking pictures of us. I think part of that is due to the fact that I sit on the floor to work with them. That puts us at eye level, and I think I am less intimidating to them that way. 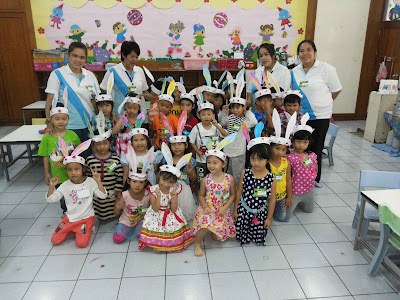 The last class was Ok at first, but by the end of it, they were just as ready to go home as we were. But, we all survived it. I am off tomorrow, because I have a doctor appointment, and need to get my 90 day Visa stamp. The company was supposed to do that for me, but gee whiz, I didn't see our fearless leader anywhere today. Imagine that! So, I will see the kids again on Wednesday, and then have the 1st - 6th graders on Thursday and Friday, or so they say. Who knows?

At least one of the guys won't be coming back next term, so I might think about asking to transfer there. We found a very nice apartment complex there through one of the teachers that I work with now, Marlene. She and her boyfriend live there now and are quite happy with it. Plus, the guys that teach at St.Peters are a pretty hard core bunch, and a lot of fun to be around. We'll see.

*Update: The last day of this was a field trip to a few different places. The first was a Swiss sheep farm. Three tired ponies, 10 bored goats, and a shit load of overpriced t-shirts for sale. Blah!

The second place was called "Santarini". It was half amusement park, and half designer outlet mall. Interesting, for about 15 minutes. The only noteworthy occurrence was the accident involving 3 of our buses and 4 cars. There were a few bloody noses, but nothing serious. One of the Thai teachers seemed to have some kind of nervous breakdown because of it though. Strange.