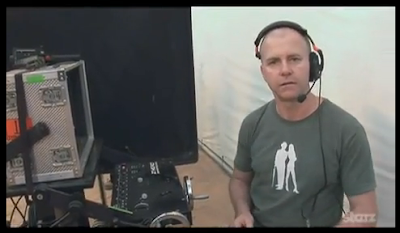 I was kind of half watching a show about the filming of the "Spartacus: Blood and Sand" series. About halfway through it they flashed to a shot of one of the producers or directors standing next to a camera. It wasn't until after the show had gone on for another minute or so, that I thought "Damn, that guy's t-shirt looked familiar".

I went to Youtube and pulled up all the trailers and "Behind the scene" type of stuff, and finally found one that showed that guy. Hey! That's my t-shirt design! It's a silhouette of John Steed and Emma Peel from the old "Avengers" series from back in the late 60's. Lots of other people have done variations on that silhouette shot from the opening credits, but as far as I could find, none of them are exactly like mine.

Odds are that he didn't get it from me, but you never know. If he did buy it from me, it must have been several months ago, because I took that white version of that design down because it wasn't selling very well. The black silhouette version is still here though.

Whether it is or isn't my design doesn't matter much I guess, but I must admit that it was a real rush thinking that it could have been.
Posted by Don Brand at 3:55 PM 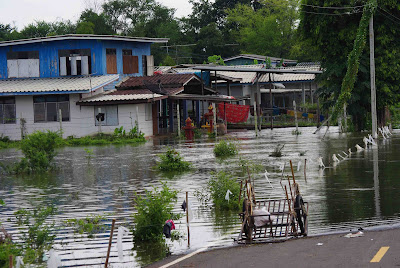 We get some serious flooding every year at about this time. Sometimes much of Bangkok is underwater. I guess filling in most of the canals wasn't such a good idea after all, was it.

We get hit here pretty hard too, because we live close to the dam and the river. This year, 8 out of the 10 villages in Roong's district totally flooded out. She has been working 7 days a week to supervise the distribution of food and clean water to the refugees. The worst part may be yet to come though, because after the flood waters recede, then they have to deal with the mosquitoes and disease that always seems to follow this time of year.
Posted by Don Brand at 7:25 PM 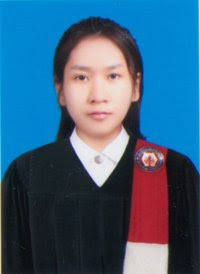 She did it! Palmiez has finished University. Well, almost. Apparently her last semester is an OJT type of deal. She has already found a job at a company in Bangkok that will hire her for the semester to work in their IT department. I imagine, that if she does well they will keep her on a permanent basis.

Her final project for this last term was to construct a pen that could identify it's owner's signature. That way, if it was stolen, it wouldn't work for the thief. She confiscated my drawing tablet to build it, I hope I see it again someday. She should be home in a few days for a brief vacation before she starts her job. I am anxious to see how her project turned out. We have already gotten her term grades, 3 A's and 2 B's. We are very proud of her.
Posted by Don Brand at 4:34 PM 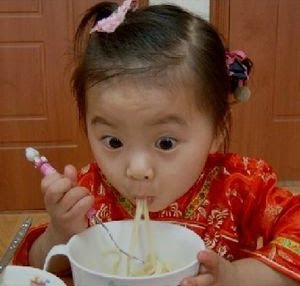 If knowing the difference between adding a little pizazz to a dish and burning the enamel off one's teeth is an art, then the Thais are still finger painting. Thai food has a lot of chilies in it, and they diabolically come in all kinds of colors so you can't always easily sort them out.

The easy solution would seem to be to tell the waitress, or the cook, "Mai pet, kob". That means "Not hot, please" in Thai. For some reason, that doesn't work very well. I am not sure if it is because the waitresses just don't pay any attention to what you are saying, or because the cook thinks that the look on your face you get after swallowing a mouthful of those things is funny as hell.

At first, I thought that I was just getting a bit older and couldn't handle the hot stuff like I used too. I would take a bite of something, turn beet red, and start sweating in places that I didn't know I had. Then, I would raise 7 kinds of hell about it, and the girls would be laughing their little brown asses off. Mind you, this would happen at the same places I have been eating at least a few times a week, for almost 5 years now. I was pretty sure it was a conspiracy, because Thai folk can have a pretty evil sense of humor when the mood strikes them.

But, after watching our girls for a while, I noticed the same thing happening to them too. They are just sneakier about their suffering. After Palmiez would take a bite of something, She would put her head down a little to chew it. I asked her why she did that, and when she looked up at me, it was clear as day. She had tears streaming out of her eyes and a water mustache.

I asked her "Alloy mai?", which means "Is it delicious?". To which she coughed, blinked back the tears, and sputtered "Chai, alloy mach daddy", which means "Yes, it's very delicious". So, I asked her why, if it was so good, was she crying? She just giggled and kept eating.

I have, on many occasions, tried to explain to them that "hot" is not a flavor, but have met with no success. Roong tells me that chillies are good for you. She can't seem to explain why, but remains convinced that it is true. Deep down, I may be hoping that maybe there is some wonderous hidden health benefit to them that I haven't discovered yet, and that she puts them in there because she loves me. But, until I develop the ability to leap tall buildings in a single bound, or live to be 147 years old, I will remain convinced that she does it just to see ridiculous faces I make when I come across one of her culinary booby traps.
Posted by Don Brand at 11:26 AM