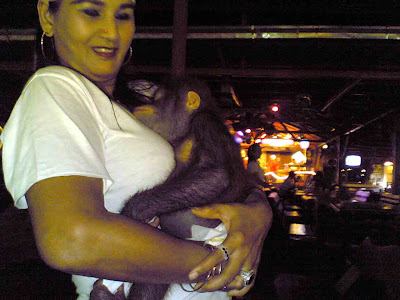 You get used to some pretty strange things here. A few times a month, you have to wait a bit at an intersection, because there are elephants stomping down the street. Cobras in the bathroom, stuff like that. But this one was the most interesting. I finally got Roong to go to "Long Bia" again. She doesn't like it much, because the music is a bit loud for her, and the food isn't that great, but she finally caved in.

While we were sitting there, one of the regular waitresses strolled up with what looked to be a baby in her arms. I must admit that the long arms and long orange hair threw me off for a second or two. Most kids here have black hair. Anyway, it turns out that she was holding a baby Orangutan. It seems that one of the keepers at the local zoo occasionally gets a wild hair, and takes one of the animals for a night out. Babies give me the creeps, but I must admit that holding a baby Orangutan is pretty cool. They hang on with their feet. Either he was pretty tired from all the excitement, or maybe he just found a nice soft place to put his face, because he just hung on and slept. Was very interesting indeed. The picture was taken on a cell phone, so it's not too clear, sorry.
Posted by Don Brand at 10:42 PM 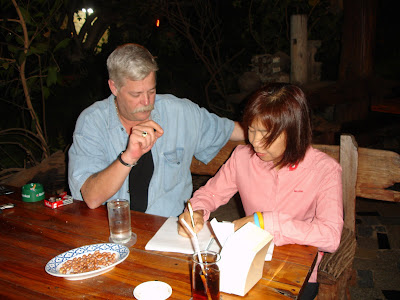 Which is basically like being the head french fry boy at McDonalds. I have been teaching here in one place or another for almost 3 years now. It seems to finally be paying off a bit. People have started to come looking for me for lessons. That's a good thing because trying to initiate a class or group to learn English here in Pattananikom is pretty difficult. The few times we have tried always start out great, but slowly fade down to classes that are too small to make it worth while. Let's face it, learning a language pretty much sucks if you don't have a reason to do it.

This scared me because I just assumed it meant I wasn't a very good teacher. But, although I still have a lot to learn about my new career, I don't think that's really the case. It's just hard to keep kids focused or even interested in learning English here. We are so far away from any other exposure to the language that most can't imagine why they should bother to learn it. Kids in Bangkok, Pattaya, or Chang Mai hear, see, and use at least some English every day. But here, unless they happen to be talking to me, they don't.

Luckily, now that I have been here a while, people that are serious about learning have started to look for me. They young lady in the photo's name is Dok-Mai. She heard through friends that Roong and I go hang out at Bannok at least once a week or so, so she came and found us there. Give lessons in a bar? Hey, why not? Roong removed my beer and put a glass of water in front of me for a better appearance. All that did was make the lesson go quite a bit faster, so I could get my damn beer back. Haaa! Like anyone is going to believe that.

The local school that our daughter attends has called Roong several times in regards to hiring me for next year. I would like to teach there, because they have 10th - 12th grade there, and my current school does not. I would like the experience. But, as they are a government school, they are under funded, and their management is a bit shakey. That's ok though, as my boss has assured me that Penpattana will be renewing my contract for this coming year. Though probably without a raise from the cheap bastard. I keep praying that one day Roong will get tired of living here in the styx, and we can move to a real city.

I am supposed to start teaching an adult next weekend. She lives in Saraburi. That's about 30 minutes south of us. Her husband is in America, and she wants to take a crash course in conversation before she moves there. At first I wasn't sure what to teach her, but then I just kind of let my mind wander over what an average day was like in the USA. Coupling those things with what I can imagine she is going to go through when she immigrates there, gave me a pretty good idea of what she may need.

Roong is setting up a small course, maybe 6 weeks, at here district that I will teach over the spring vacation. 13 days until 2 months of freedom!!!!!! There won't really be much free time though, because I have to write 2 books to use in my classes for the next term. I have been working hard to refine my lesson plan, and try to put some things in there that the kids will be ok with. I think I have made good progress with that this term. I will know more once I have put it all together, and can look at the finished idea.

Roong and I are going to Bangkok today. We will meet Palmiez there, have lunch, and then go wander about. Palmiez is in the middle of exams now. I hope her grades come up a bit. Last time was a wee bit disappointing.I am hoping we have enough time to go to the used book store again. It's small, but it's the only place I can find affordable used books in English. I will say one thing though, lack of availability sure broadens your horizons. I will read just about anything, so i have found some new things that are interesting, that I wouldn't normally have looked at. Pukky has seemed to cheer up a bit lately. I am not sure if it's due to the fact that she is realizing her boyfriend is a loser, or if she's up to something. We will see. That's all for now. I will probably be posting more after the kids are finished with their exams, in about 2 weeks.
Posted by Don Brand at 5:54 AM