As Good As It Gets! 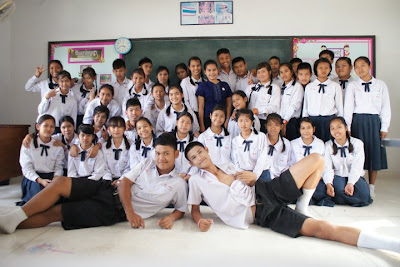 Here they are folks, the cream of the crop of the 2010 - 2011 school year at Penpattana. This is, or was, my M-2/5 class. They were not my highest skilled class ever, but they were pretty close. They were the most colorful bunch I have ever had, though. Take the 2 boys in front.

The one on the left's name is Bom. He was a hoot. At first, he wouldn't do a damn thing, and on the rare occasion that he did, he just had one of the other kids copy his work for him. He has always been the biggest kid in the class, so even the teachers don't argue with him. This got old quick, but he seemed determined to do nothing. I finally had had enough, and told him that if he wasn't going to do anything, then he could get the hell out of the class. He refused. I told him to leave, again. He refused, again. I picked him, and his desk up, and dumped his happy ass out the door. Bom quickly realized that he was not now the biggest, and by far not the meanest guy in class anymore. I never had a bit of trouble out of him after that, and his grades improved quite a bit.

The other guy is Ron. Ron was the class clown that couldn't stay quiet for more than a minute or so. This actually came in quite handy, because Ron has no fear what so ever of trying to speak English. He was my go-to kid if the lesson was slowing down. Although, I once asked the class who or what they dreamt of being some day. I got a lot of the standard answers like a doctor, nurse, pilot, policeman, etc. Ron said he dreamed of being Lady GaGa. Who knew?

Do you see, in the first row of the kids that are standing, the second from the left. She is leaning forward. That's Tip. I have had Tip in my classes for 4 years now. I think she was a good student, but I am not sure, because she was never there. Every day, without fail, Tip had to go see a teacher, or take a folder somewhere, or had a special something or other to do that day. It wasn't just my class either. There are about a dozen of them that seemed to have adopted the role of an assistant teacher, or secretary. Wonderful girl, and smart as heck...I think.

Upper most left, giving the mandatory little Asian girl peace sign thing. That's one of the students that I am the most proud of, Bpla. Her name means fish. Someday, I would love to be there when a Thai child is born, just so I can see the process that Thai parents go through when naming their children. I can only assume that it involves mass quantities of alcohol. I have had students whose name's translate to fish, chicken, frog, pan, nurse, and dozens of other animals or occupations. The crown goes to one of my boys whose name is Foremost. When asked, he says that yes, his dad named him after a dairy company. Apparently there was an empty milk container sitting on the table at the time. Reminds me of the "2 dogs f***ing" joke.

The teacher's name is Eng. Sweet as can be, and actually speaks English pretty well. She has been a big help to me over the years. She has a good grasp of the difference between what everyone thinks the kids can do, and what they actually can do.

I will miss these kids this year. But, there is a new crop to take the place, as there always is.
Posted by Don Brand at 8:14 AM 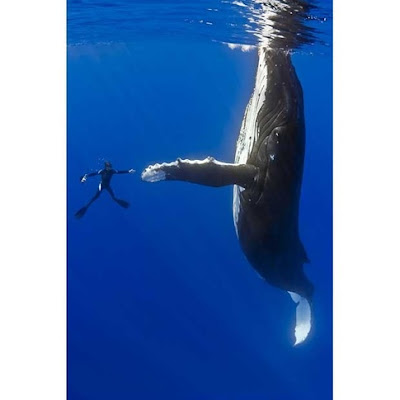 Quora asked which photo people thought was the most epic photo ever taken. Many are classic shots that we have all seen, but there were also a lot of pics that I had never seen. Some were amazing, like the sunny day/fireworks display/Lighting storm/Comet all in one shot. And some were truly heart wrenching, like the 9-11 photos, or the pic of the starving little girl trying to crawl the 1 kilometer to the food distribution station. There are lots of incredible shots here, check them out.
Posted by Don Brand at 10:31 AM 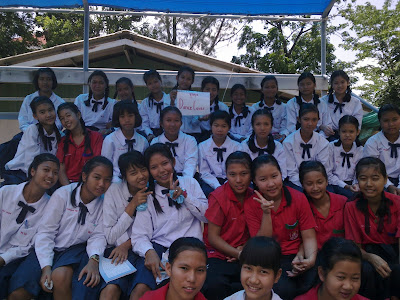 Ha Ha! You thought you were in for some of Pattaya's naked cutie babes, didn't you? Well, not today (that does sound like a good idea for a post though, stay tuned).

One of the fun things about being here is the fact that they have lots of holidays and celebrations. It seems like once a week, they are having a celebration for one thing or another. Our school jumps right into the festive mood too. A big dance routine is what usually happens. They are always very colorful, and last for about an hour. That's cool, because it means I get to miss the first class of the day.

This photo is of the dance team that does most of the routines. The faces change as the girls and boys come and go, but they always put on a great show. Miss Roong is in charge of setting these things up, and doing the choreography. She also teaches the kids classic Thai dance, which is quite beautiful to watch.
Posted by Don Brand at 6:24 AM 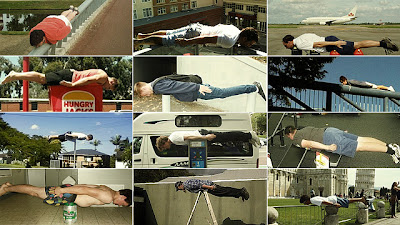 Have you "Planked" lately? Planking seems to be the latest "I can't think of anything better to do" craze to be sweeping the planet. Well, at least Australia. Apparently, to Plank, one must lay face down and stiff as a board in the most ridiculous or dangerous place one can find, and get a photo of it. You then post your plank proof on Twitter.

I may try and get my entire 7th grade class to do it, and go for some sort of Planking record. Of course, I will wait until just after a really good rain to do it. I have even made a few t-shirt designs about the new Planking fad. Let's see whether we have another meme on our hands. 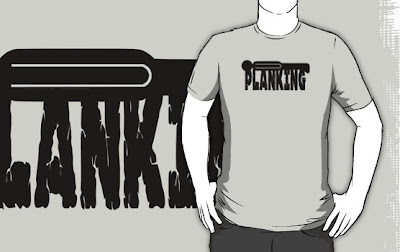 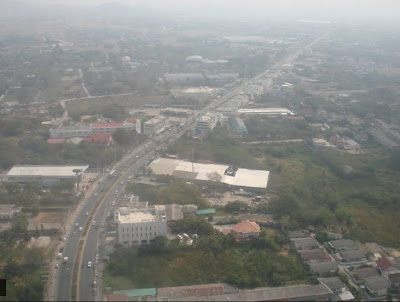 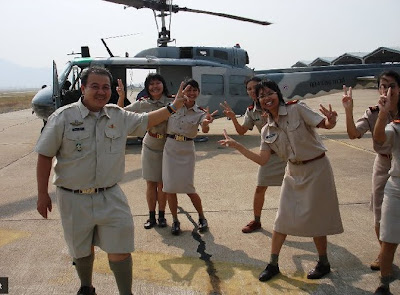 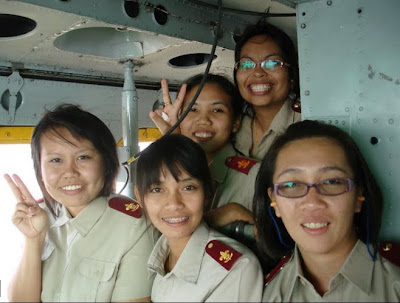 A little while ago, a few of the teachers from my school got to take a helicopter ride that had something to do with their scouting. The scouts are a big thing here. Just about every school has a scouting program that seems to be mandatory. That is Aww on the far bottom right in the close-up, and Peaw next to her in the middle. I know two of the others, but I don't see them that often at school, so I am not sure about the names.

I want this house! 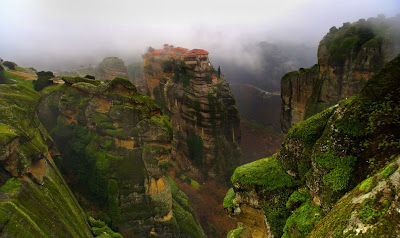 This has got to be one of the coolest pics I have ever seen. I think it is a monestary in Greece. I would love to live there. Not in a monestary I mean, I would have it de-monked first, of course.
Posted by Don Brand at 10:59 AM 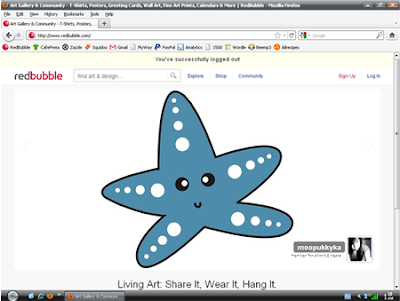 Our daughter Pukky has just started making her own t-shirt designs on RedBubble. She has several pretty cute designs up now, but one has grabbed some attention from the powers that be. Her starfish design made it to the RedBubble homepage. Great exposure and that warm fuzzy feeling all at once, you gotta love it.
Posted by Don Brand at 1:14 AM