The Rabbit Is Everywhere! 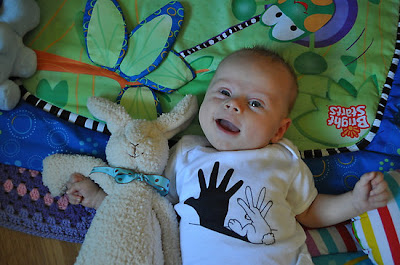 RedBubble has a special section called "The Buyer's Booth". It's a place where people that have purchased t-shirts and stuff on RB can send in a photo of themselves, or whomever, sporting their latest fashion acquisition. Someone was nice enough to send in a shot of their son Zak wearing one of my "Rabbit Hand Shadow" baby tees. I am not sure who the rabbit laying next to him is, some wannabee I guess.

Zak has a pretty big smile on his face, but I am not sure if it is due to the fact that he knows he is looking sharp in his new Mobii art t-shirt, or because he just filled his diaper. Hey, as long as he's happy! 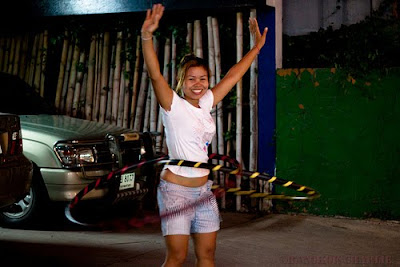 Are you worried that you have gained a few extra pounds? Do you think you might be working up a bit of a spare tire? Don't bother asking your other half. You know damn well we have to lie, or risk eternal damnation. If you want to know the truth (and you know you can't handle the truth!), just pick up a hula hoop and have a go at it. That will answer your question real quick. Because, fat people can't hula-hoop!

Here's what happened. Mondays and Tuesdays are my busiest days at school. I have a full load of classes, and most of them are my ....umm.... less than brilliant students. It can be nerve racking, to say the least. Anyway, after Tuesday's battle, I went to Bannok to have enough beers to convince myself that it was all just a bad dream. My wife stopped by on her way home, and we talked for a bit before she left.

There was no one else there for about an hour, and I was quite content just having a few, and listening to music on my mp3 player. Then, Gee (one of the waitresses) walked in sporting a pair of hula hoops. One large one, and one small one. She spun the large one, and made it look like it was the easiest thing in the world. I think she even called her boyfriend on her cell phone while she was doing it.

Well, the other girls, including Eid (the owner) all gave it a shot, and had no trouble at all. Then, they asked me if i wanted to try. Now, I am sure that I could hula-hoop when I was a kid. I am quite sure that I remember doing it. But, I couldn't even get it to go around twice. The obvious reason to me was that it's because I have no waist. Basic physics tells me that if the hoop doesn't have a slighter axis point to rotate one, then gravity will take charge and it will go down like Oprah on a baked ham.

The girls thought that this was hysterical. They decided that men can't hula-hoop. I got Eid's cousin to give it a try. He isn't as big as I am, but living in a restaurant hasn't helped his figure any. He couldn't do it either. So, I called on Air to try it. He has given up his fake boobs, but is still built like a tall skinny girl. No success there either, and he has hips! he was worse than I was at it.

About then, Blinky came out of the back room. We asked her to give it a try. Luckily for us, her hula-hooping is about as good as her karaoke singing. And, even though she has a smoking hot body, she couldn't even get it to go around once. Haaa! But, even with that small victory, the rule seems to be that unless you have at least some type of waist, you aren't going to be able to hula the hoop.

I have now vowed to lose enough weight to be able to hula-hoop better than Blinky can. This may take a while.
Posted by Don Brand at 8:31 PM