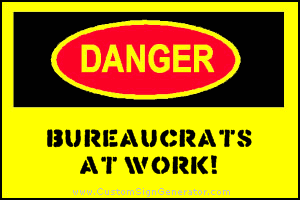 Well well well, it's visa time again. Every year, I have to go and have my visa stamped so I can stay another year in hell...err, paradise, yeah yeah, paradise. I shouldn't really complain, because I usually don't have a lot of trouble with this. Roong is a fairly high ranking government officer, so most of the people we have to deal with don't want to incur her wrath. She's little, but she has great big pointy teeth.

The complication that seems to be unavoidable is the fact that I also have to get my new work permit and my new job contract all in the same month. Now, you would think that there should be some way to set this up so it can all be done on the same day, wouldn't you? We have tried, but if you don't shoot yourself in the foot, Thailand is always there to do it for you. Trust me, they are experts at wasting time and money. You can't get your visa unless you have a work permit, and you can't get your work permit without a visa. So, I have to go get a temporary work permit to get my visa, get my visa, and then go back and get my full work permit. At first, this sucked because we had to make two trips to Bangkok, and two trips to Lopburi to do all of it.

The Bangkok office is not a user friendly place. It's noisy, overcrowded, under staffed, and the staff that is there are pretty clueless. It took all day to get anything done, and there was a good chance that you would run into a problem and have to come back again to fix it. No two of the officers there did things the same way, or required the same documentation. Weird, eh? We had to miss a day of work every time we went there.

But, they have since opened an office in Lopburi. This has helped a lot. The staff there is very nice, and they all do things exactly the same way. The only problem we had this time was with the Ministry of Education. In an effort to prove that were hit with the same big "DUH" stick like all the other government offices I have had to deal with, they decided to date my two year extension for sometime in January. WHY?????????

One thing did help a bit. As the nice lady at the Visa office was explaining the latest crop of difficulties that we were headed for, she also mentioned that their office was selling fund raising tickets to some kind of live talk show that was coming soon. The money was being raised so that the Visa office could build a new building for themselves. It seems that they are borrowing the one they are using from some other agency. The tickets are 1000 baht each. Upon hearing this, Roong gave the slightest of knowing smiles, and assured the nice lady that we were there for no other reason than to support our fellow government employees. Buying the tickets, coupled with the fact that Roong went to university with about half of the women in the office, seemed to help.

Our fund raising friend then excused herself to go talk to her boss for a minute. When she returned, she went into a rather impressive 30 second two handed permit stamping flurry. Then, she winked, smiled, handed me my passport and two tickets, and said "Everything OK now!"

Visa day is always a roller coaster ride of emotions, but I have learned that if you keep calm, pay attention, and have married a woman with some serious rank, an opportunity to umm... make things easier will eventually appear.
Posted by Don Brand at 5:12 PM 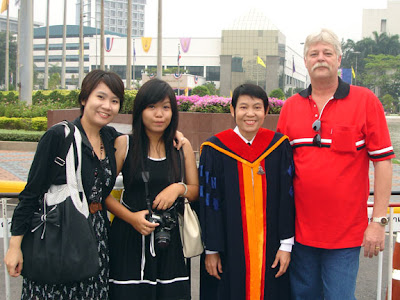 The big day has come and gone. Last Friday, we all went to Roong's university so she could get her Masters diploma from big princess. The girls took a few hundred photos, most of which had absolutely nothing to do with the day's festivities, and had at least one head cut off in each of them. This is a shot of us in front of the small lake in the center of the campus (lots of very large tutrtles in there). From left to right, Palmiez (AKA Ms. Chewiize Shinoda and No. 2 Boo Boo), Puk (AKA Moo noi and No. 3 Boo Boo), Roong (AKA Big Mama and No.1 Boo Boo), and me (AKA Big Daddy and Papa moo).

We went down there Thursday after work. That evening, Roong and Puk wandered around and did what ever it is that they do. I went to The Dubliner for some cold American beer, a good cigar, food that I recognized, and people that speak the same language that I do. I got all that and a handful of cute waitresses, I was content. The next morning, it was off to the ceremony.

The day was fairly busy for all of us, except Roong. They locked all of the graduates in a big room and wouldn't even let them out to pee until after the princess had came and left. I feel sorry for the princess because during that week she had to hand out about 40,000 diplomas. Each student had about 3 seconds to step up, do their little royal hand gesture to receive their diploma, and then take a few steps back and bow.

The princess pulled up in her dijon mustard colored Rolls Royce at about 9 am. She was followed by a small fleet of red Mercedes Benz'. I'm not sure who all of those people were. Anyway, since we couldn't go into the building, I took the girls shopping.

First we headed for Siam Paragon. It's a huge department store about an hour by taxi across Bangkok. The bookstore was amazing, but very expensive, so I didn't get anything. I will go back and raid it some day though. There was a Lamborghini dealer on the 3rd floor. The girls were baffled as to how they might have gotten the cars up there to the showroom. There were two beautiful salesgirls in there, but they were both fast asleep in their chairs. I wonder how many people actually buy luxury sports cars at the mall?

After that we had lunch at Burger King. Yeah, I know, but when you only get to eat that garbage once a year or so, you miss it. Then we jumped on the subway and went to a different mall to get Puk's uniforms, but I don't remember the name of it. We found a place to get Puk's uniforms easy enough, but waiting for her to pick out a pair of shoes took a while. She seemed happy enough with everything.

Then, we headed back to the campus. 3 hours of 90 degrees and 99% humidity. Since no one was allowed in the room with the princess, they televised the ceremony on TV in many of the other buildings. We found one with air conditioning and watched a bit of it. After it was all over, and the princess had gone, we found Roong in the crowd and tried to head for the exit. It was about then that her sister Thaa and her husband Egg showed up. Time for more mandatory photos. I was having a nicotine withdrawal fit about then because you can't smoke on the campus, so Palmiez and I hit the gate while they took photos.

Thaa had apparently already made a reservation at some Japanese restaurant on the other side of the city for dinner. That was a bit far for us after a busy day, besides the fact that none of us like Japanese food all that much. But, the girls wanted to go, so they headed off and Roong and I went back to the hotel for a nap. With the exception of 2 double Whoppers with cheese, extra pickles,tomatoes, and mustard, possibly the best part of the day.

Later that evening, we wanted to go out to eat, but weren't sure what we wanted. I remembered that I had heard a friend mention that Bangkok was now sporting a few Mexican restaurants that were supposed to be pretty good. So, we tried to find one. I first asked the people at the hotel if they knew where one was. I should have known better. They had no clue, no phone book, and apparently no 411 service. Plan B was to ask a taxi driver. That worked better. He made a few phone calls, and came up with "Sunrise Tacos" on Suhkumvit Rd. Off we went.

That place wasn't bad at all. It's about half a step above a Taco Bell, but the food and the service was good. I got a burrito that was the size of the NY Times rolled up, and all the sour cream and guacamole I could handle, and was in heaven. Roong had her first Quesadilla. Roong isn't a big meat eater, so it was a bit much for her. But, she seemed to like the taste, and will probably enjoy it more the next time, now that she knows how to adjust her order.

As I was getting ready to leave the bar Thursday night it struck me that I still had about 450 test papers to grade, which equals roughly 25,000 questions that I had to wade through. I sat back down and had 2 more beers. We headed back home early this morning to get caught up on everything we gotten to escape from for a few short days. I think I have to go take those damn teachers tests again in May. Only 60 more days until beer and burritos!
Posted by Don Brand at 8:22 PM