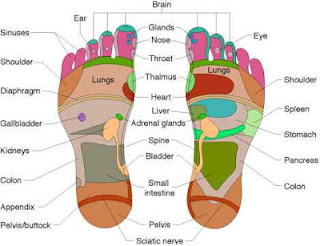 Well, I have tried just about everything else, why not? So, it was off for a Sunday morning acupuncture session. The numbness in my feet has spread just a little bit, so Roong suggested trying a bit of Chinese medicine. It was interesting combination of the old and the new. The witch doctor was a relatively young guy. He spoke enough English, so that Roong had to do very little translating. I explained what the symptoms were, and did some doctorly nodding and "Hmm'ing" and then said..... "According to Chinese medicine, your body is cold". Given the fact that it is hotter than hell here most of the time, I was a bit skeptical. He then went on to explain that the pulse in my legs was very weak, and that he thought we should try to open up the blood vessels. Ok, that made more sense.

I laid down on the table, and he started sticking pins in my feet and legs. This wasn't as bad as it sounds, because my feet are somewhat numb, so I didn't feel most of them. Notice, I said "most". On my calves and shins, he hit a few spots that were normal. It's a strange feeling. It doesn't hurt, but because he is needling a nerve cluster, there is this small jolt, and a quick muscle spasm, it freaks you out a bit.

Anyway, after he stuck about 14 or so of these things in me, he hooked up electrodes to all of them, and ran current through me to stimulate the nerve centers for about 15 minutes. After it was finished. My feet felt as if I had just walked quite a bit. He then gave me the "watch what you eat and quit smoking" lecture, because he thinks cholesterol and smoking are contributing to the constricting of the blood vessels. He says I need to see him 2 times a week for a month to see if the acupuncture is having any effect. He also gave me 2 prescriptions, one for vitamin B, and the other is something to help open the blood vessels.

Getting a combination of modern medicine, and medicine that has been practiced for 5000 years is pretty cool. I will go back next week, and see what happens. Roong is happy, because she now has the whole new diet thing to worry about, and she gets to try and make me eat more fish. I have no memory of him mentioning fish, but she swears it's true. Transformers: More than meets the eye! 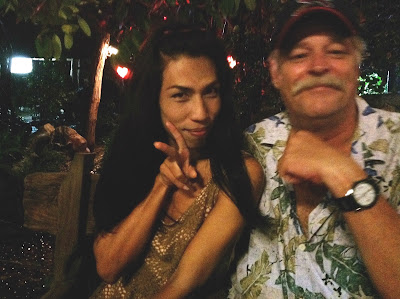 That's for sure! Last week, I was at Bannok having a few beers with with Tony. It was pretty quiet night, and we were just yakking on about this, and that, when in walked a group of about 12 or so ladies. The first thing that struck me, was how tall most of them were. At a guess, I would have said that the smallest one could have pretty much looked me in the eye. The second thing that struck me, was that as they walked by, one of them said "Hi".

I don't know why they do what they do, but I really don't give it much thought either. I have to admit that as far as most of the population around here goes, they are a hell of a lot more fun to be around. The over the top drama, the exaggerated style, all of it. These girls were out to have fun, and they did.

Apparently, it was one of their birthdays, because the small one went around to all the tables handing out little squares of birthday cake. Most everyone graciously accepted, but a few patrons were rather snotty while refusing. No worries though, because she matched them glare for glare, and dismissive snort for dismissive snort.

Meanwhile, the rest of the katouey were having a blast, singing deep throated karaoke, and getting just about as rowdy as any of the guys would have dared to. When cake girl got to our table, Tony and I were each spoon fed a few pieces of the community cake. The extra attention even got us a few glares of our own. I see them as little victories.

While she was there, I got Sheena of the jungle to sit down let Tony take a shot of us with his iPad. It turned out kind of fuzzy, but it's really hard to get a good photo in that place for some reason. Afterwards, she gave me a good squeeze, and off she went.

After that, the night went on as nights do there, too loud crappy singing, and shitty service. As I was walking out of the bar later on, I heard, in a quiet, low, and rather husky voice.."Aren't you going to go home with me?". I turned around and gave her a sad smile, shrugged my shoulders, and showed her my wedding ring while baring my teeth and making tiger claw gestures. She got the idea, smiled, and gave me back a sort of Betty Rubble type giggle, that is if Betty had been a Doberman Pincher I mean. Ohhh, fair well and ado, you fair Spanish ladies...
Posted by Don Brand at 6:30 PM